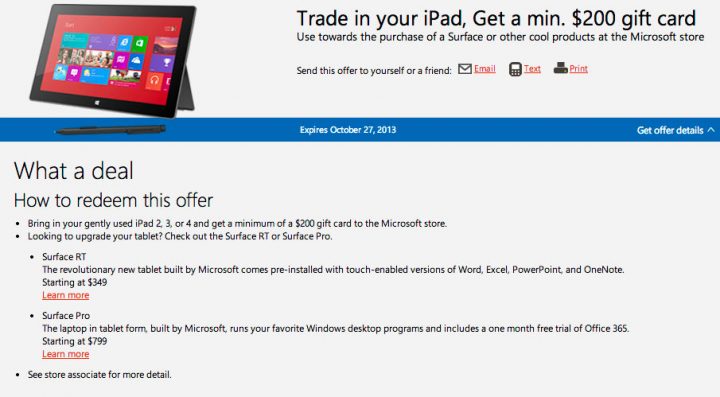 Microsoft buys your iPad back and convert it in a $200+coupon to use in their Microsoft Stores. This works only in the United States and Canada, where Microsoft gives you a voucher worth $ 200 or more if you give them your iPad, starting at the second generation iPad. In exchange, the goal is naturally to have you buy a Windows 8 tablet or Surface RT sold $349 or Surface Pro sold $799 . This offer is only valid in Microsoft Stores in the United States and Canada.

The timing of this promotion, which runs until October 27th, is certainly to lure a fringe of students seeking their new laptop for the new school and academic year. Indeed, a student who has an iPad, and wants to purchase an ultrabook, could usefully be directed to the Surface Pro, a configuration that is certainly the only one on the market to really substitute for the purchase of a laptop, since it is the Surface Pro can run the laptop version of Windows 8 and all usual applications, starting with the Office.