SanDisk iXpand: 128 GB of flash drive and a lightning connector for your iPhone and iPad

SanDisk is updating its extra flash memory drive for your iPhone and iPad with both a USB connexion and a lightning connector. The SanDisk iXpand new generation will allow you to expand the storage space of your iDevice of another 128 GB. 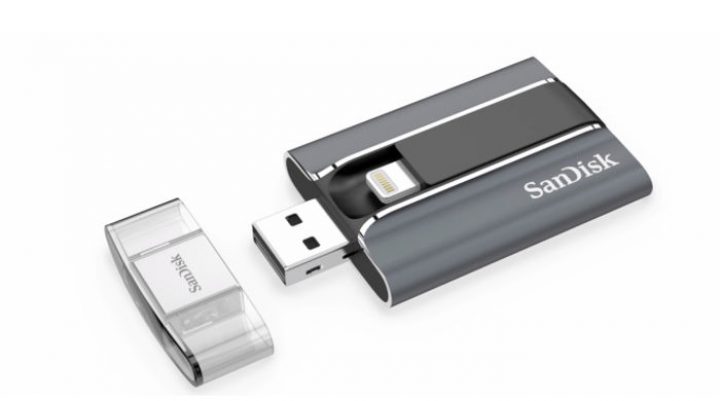 SanDisk is updating its extra flash memory drive for your iPhone and iPad with both a USB connexion and a lightning connector. The SanDisk iXpand new generation will allow you to expand the storage space of your iDevice of another 128 GB.

As you all know, Apple sells at a very high price the storage space of its iOS products. People who are on a budget and that go for an 8 or 16 GB iPhone make a terrible mistake because they can actually not install many applications, nor take really images, nor store music. So if you feel like you’re too tight in your iPhone or iPad, SanDisk comes with a smart system that allows you to expand the storage capacity of your iDevice. SanDisk iXpand is a kind of USB flash drive, that also gets a lightning connector. The presence of this lightning connector makes it compatible with the latest iOS products since the iPhone 5. SanDisk offers the iXpand flash drives with capacities of 16, 32, 64 and now 128 GB.

Your iPhone or iPad internal memory is what it is, but it has the merit of being absolutely embedded and built-in both the hardware and the operating system. The storage space is managed by iOS. On Android devices, one of the strength for many is that it allows to easily upgrade the storage space thanks to a micro SD card. That’s neat, that’s very cheap but this makes an extra thing to manage on your device. SanDisk offers, with the iXpand iOS app, a pretty ok solution to address this issue. The iXpand iOS companion app is in charge of handling the extra storage capacity. It launches itself as soon as you connect the iXpand flash drive to your iPhone or iPad. It allows you to browse through its content and to synchronize automatically your photos or videos from your iOS film strip. It reads most of multimedia files formats as AVI or WMV. This means that you won’t have to go through long and fastidious converting processesses for your videos to store them on your iPhone or iPad.

In the US, SanDisk has just announced the availability of the 128 GB iXpand flash drive with lightening connector for the price of $149, 99.