Under the name of Phorm, the company Tactus Technology is proposing a suprising iPad Mini cas

Under the name of Phorm, the company Tactus Technology is launching a suprising iPad Mini case. In addition to the protective case for your iPad, Phorm also comes with a screen protection film which, as if by magic, turns into a touch keyboard, which is a little magical too.

By installing Phorm on your iPad Mini, an elastomer film overlays the touch screen. It integrates micro channels for circulating fluid in the area where appears the iPad’s native keyboard on screen. You can also see a big cursor in the back of the case which activates the fluid circulation. By moving it in a certain direction, pressure is sent into the channels for circulating the fluid uniformly. Thus letting appear small bubbles in specific locations on the screen, that is in each virtual keyboard key of your iPad Mini. These bubbles provide tactile sensation by touch, whilst providing at the same time physical information feedback for each keyboard entry. This is what improves keystroke in a virtual keyboard usually inert. In order to remove these bubbles, you need to swip the cursor in the opposite direction. This creates an easing of the pressure and the bubbles deflates automatically. This system employs the microfluidics technology.

The Tactus Technology’s purpose is to facilitate the use of iOS devices, in this case, the iPad Mini. By joining tactile to something more tangible, the microfluidics process makes the manipulations on the tablet easier with more feed back. According to Dr Craig Ciesla, co-founder and SEO of the company, this system is safe for the iOS device even if it falls and the case is damaged. Moreover, the case also guarantees optimum protection for the iPad Mini according to live-scale tests conducted by the firm. As regards the “magical” keyboard Phorm, it is designed to be compatible with the iPad Mini native keyboard and others alternative keyboards, namely Swiftkey, Swype and Flesky. Of all people having tested Phorm, 70 % have preferred the physical sensation provided by this microfluidic keyboard than the classic flat touch screen. 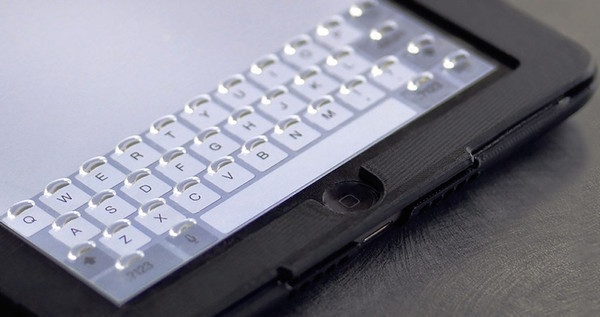 The virtual keyboard of Phorm Case

However, the system requires further improvements : Phorm does not support the landscape keyboard mode with its large keys. Furthermore, it is not operational with other alternative keyboard using keys of different sizes or those having customized user interface endowed with different special keys.

If the keyboard case Phorm only adapted to iPad Mini, Tactus Technology had also launched the models for iPhone 6, iPhone 6 Plus and iPad Air production. If you have an iPhone or iPad still not compatible and if you like the concept, and its right than this system is devilishly ingenious, you can registrer on a waiting list for the model dedicated to iPhone 6 Plus or pre-order the one for iPad Mini which costs 99$ in Phorm’s website. Phorm is planning to ship this summer and will be proposed in slate grey and sky grey color. Its final price will be 149$.