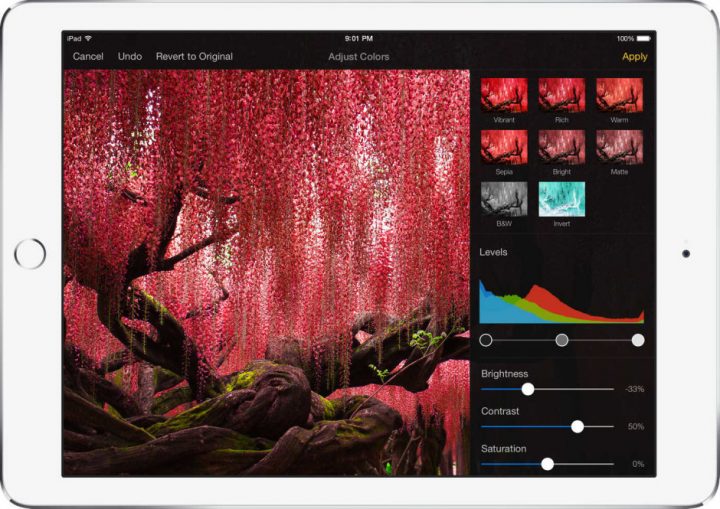 PixelMator for iOS receives today a great update in this version 2.2 which brings extra fun and features to iPhone 6S and iPhone 6S Plus owners with full 3D gestures support as well as an impressive new set of functionalities and way to use the application for iPad Pro owners who invested in Apple’s stylet Apple Pencil.

PixelMator development team is and has always been very ambitious. While most of third party app developers limits the 3D Touch gestures to adding shortcuts to the app icon, PixelMator programmers seized the opportunity of this new hardware feature to implement more options and shortcuts. So, basically as with any other app, when you 3D Touch the PixelMator for iOS icon on your iPhone lock screen, you display a set of quick actions like open a photo or creat an image. When you paint with your finger on an image, the pressure sensisitivity system of the iPhone 6S/6S Plus measures for force you apply with yout fingers on the screen and sets the brush size or the effect intensity accordingly. Also, when you 3D Touch an image in PixelMator, you can preview it, duplicate it, copy it, delete it or save it in the photos app. If you press all the way down on the image, you display its full screen version.

PixelMator for iOS fully support the gigantic Apple’s tablet iPad Pro and its pressure sensitivity slylet, the Apple Pencil. PixelMator offers the opportunity to edit huge files on the iPad Pro, photos which can be as large as 1000 megapixels of definition. You will definitely have a lot of fun editing images on this huge gorgeous 12.9″ screen of the iPad Pro. But that’s not it because one of the key features of PixelMator for iOS on the iPad Pro is of course its Apple Pencil compatibility. As with a Wacom Intous pen tablet, you can directly paint on your iPad screen with the Apple Pencil stylet some effects or colors and filters while applying different pressure levels on the screen and stylet which PixelMator will take into account to adjust either the size of the brush you use or the intensity of the effect/filter you apply on the photo. Also, PixelMator for iOS on the iPad Pro will detect the palm of your hand so that it doesn’t mess and interfere with what you are doing with the Pencil when you lay your hand on the screen.

PixelMator for V1 2.2: prices and availability

PixelMator for iOS 2.2, this interesting new update for all iPhone 6S/iPhone 6S Plus users as well as for the fortunate iPad Pro and Apple Pencil users is already available on the App Store. PixelMator is priced at a mere USD 4.99.