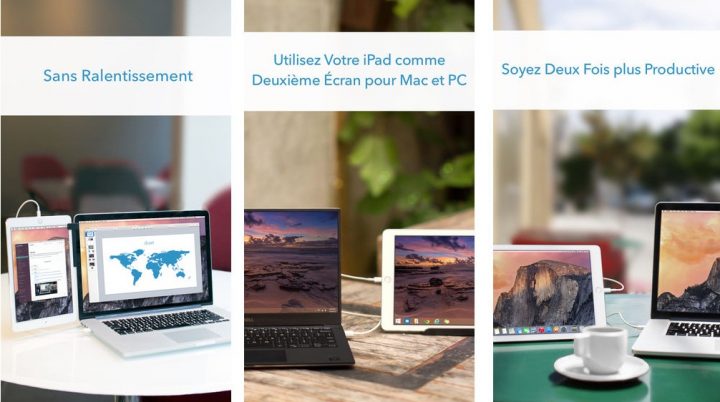 Duet Display is a wonderful application that turns your iOS device into an external secondary screen for your Mac or Windows PC. It is now updated in version 1.2 which brings a major killer feature for iPad Pro owners (also available on the iPad Air 2 and iPad Mini 4): Duet Display for iOS V 1.2 gives you the possibility to share your iPad screen to display at the same time iOS app on 1/3 of the screen real estate and Mac OS apps on the remaining 2/3 of the screen. Yes, you are not dreaming, this means that you can use your iPad to work and display both iOS and Mac OS X applications.

Even better, Duet screen for iOS V 1.2 is now supporting the Apple Pencil. Unfortunately, although this another breakthrough, the pressure sensitivity of the Apple Pencil is not yet taken into account by the Mac applications that you may use on your iPad with Duet Display, but rather helps as a mouse clicking device but with a touch screen. I do fully believe that the former Apple engineers which constitutes the Duet Display is working hard on this feature which would be a gigantic breakthrough. This would allow us to use a pressure sensitive stylus on the iPad screen to work on Mac applications! Do you see all we could do with drawing apps or Photoshop?

Another benefit of the Duet Display solution is that it uses USB connexion between your Mac/Windows PC and your iOS device that sends display data to your iPad or iPhone with absolutely no noticeable lag. Also, the new iOS and Mac OS app are less or more efficient, both energy wise and CPU wise.

Duet Display 1.2 for iOS supports the iPhone, iPod Touch and iPad running iOS 8.0 are more recent and the counter app for your computer is available at the price of USD 9.99 on the App Store.