Once again, in 2015, the iPhone is undoubtly the king of all cameras on Flickr as it is accounting for not less than 42% of all photos uploaded on Flickr. Impressive! 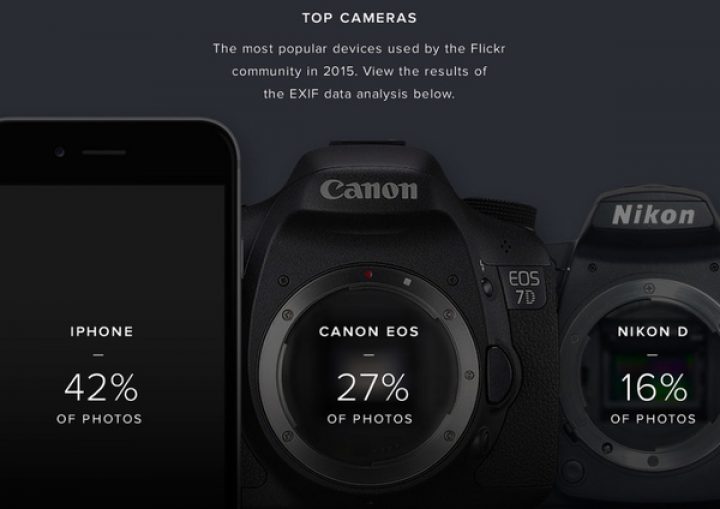 As every year, the photo sharing and storing website Flickr has published the top list of the most used cameras for photos uploaded on the plateform by its users. Once again, in 2015, the iPhone is undoubtly the king of all cameras on Flickr as it is accounting for not less than 42% of all photos uploaded. Impressive!

The more traditional DSLR cameras like the Canon EOS system is way back with only 27% of all photos uploaded on Flickr and followed by Nikon DSLRs which count for 16% of all photos on Flickr this year.

It’s not the first year that smartphones take the first steps of the podium on Flickr but the gap is being wider and wider.

If we break down the figures inside the smartphone photos uploaded in 2015 onto Flickr, we find that among the most used top 5 smartphones are 4 iPhones ! The iPhone 6, iPhone 5S, iPhone 6S Plus and iPhone 5. The only non-iPhone smartphone in this top 5 is the Samsung Galaxy S5.

This interesting figures published by Flickr tend to prove two things for me:

Make yourself a favor : backup your iPhone images on Flickr for free

Lastly, I’d like to encourage you to use Flickr 1TB photography and video storage space. I myself did the painful experience this year of all my iPhone photos of the year ereased by a faulty iCloud backup on Apple servers. Cupertino engineers were unable to retrieve my datas and I have lost many precious photos of trips to Scotland, Italy, Spain, South of France, my kids playing, family reunions and so on.

Fortunately, I did subscribe to Flickr and have used the Flickr uploadr app for iOS which automatically uploads your photos and videos of the iPhone film strip on your Flickr account. It’s very handy. It is done in background and you don’t have anything to do. It’s a secondary backup and as far as backup goes, I always advice my peers to go with two solutions. One could be faulty as you know.

So rush to Flick.com and upload the Flickr uploadr app on the App Store.