OCR Instantly is a new OCR app that will detect the text and letters of a document from a single image. 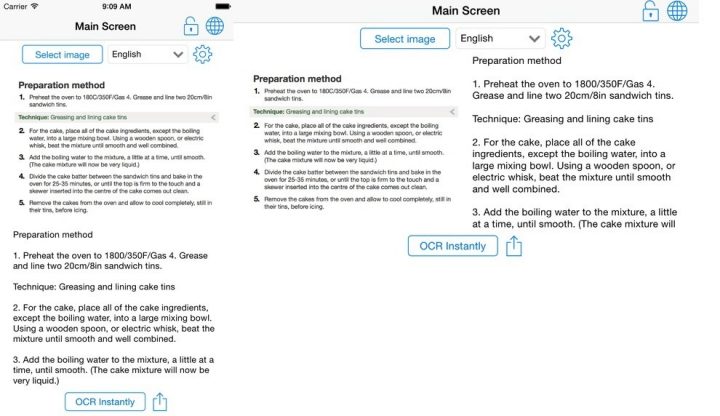 OCR Instantly is a new OCR app that will detect the text and letters of a document from a single image. Well, there is already a bunch of applications offering more or less the same functions. But I think  you may want to consider downloading and trying OCR Instanlty on your iPhone or iPad because it has a lot of interesting things inside.

First of all, OCR Instantly is a free application. It is financed through advertisement with which you will have to live with. Of course, it would be better and cleaner to have an app without any adds, but it’s a minor issue comparing to what OCR Instantly can bring you.

Second, OCR Instantly works even offline. Quite often, OCR apps similar to this one require a connection to work as they send the images to some servers which will analyze the document and gets the text information back to the device.

Finally, OCR Instantly is a versatile app that works with over 60 languages and is performing extremely well. It is quite simple to use. To scan a document and get the editable text out of it, you simply have to take a photo of the document on which there is some text, so that OCR Instantly can analyze it and transform the image into an editable text document. See for yourself the demo video of OCR Instantly below:

OCR Instantly works well, it’s a free app and it works offline. It’s simple and easy to use but if you want to get the most out of it and the best character recognition rate, you should consider taking the sharpest photo of the document you can, with the highest contrast possible. Also, focus on printed documents as the app will certainly fail on most hand written documents. Finally, depending on the layout of the document you want to digitalize that way, OCR Instantly works better if the text is displayed on a single colon if you want to work on a newspaper or magazine page, you may want to consider taking photos on each single colon individually to let the app perform in its best way.

My tip: use OCR Instantly along with Scannable from Evernote, the automatic iOS scanning app that makes wonderful job at getting perspectives and contrasts and sharpness back and track when you scan a document unheld with your iPhone and iPad.