iOS 9 runs on 57% of iPhones, iPads and iPod Touchs

According to Apple official numbers published on the App Store statistics, iOS 9 has now been installed on not less than 57% of all iOS devices. 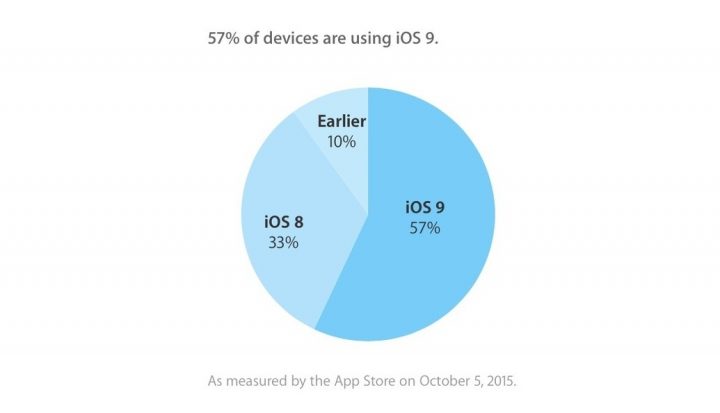 According to Apple official numbers published on the App Store statistics, iOS 9 has now been installed on not less than 57% of all iOS devices. This means that in only three weeks, more than one half of iPods, iPads and iPhones have been updated on the latest version of Apple’s mobile operating system. As a reminder, the final version of iOS 9 has been delivered to the public on September, 16th 2015.

The growth of the adoption raise of iOS 9 is much greater than the one of iOS 8 last year. At this stage, iOS 8 had only been installed on 45% of iOS devices against 75% for iOS 9 this year. The oldest versions of iOS, iOS 7 and older now count for only 10% of iOS devices.

I don’t relly explain why iOS 9 is so much popular than iOS 8, all I can tell is that iOS 8 was not bringing a lot of new features in comparison with iOS 7 the previous year. Yet, iOS 9 is an easy update to make on your iPhone or iPad, even if you own a 16 GB model. It’s very storage space savy as the update is slightly more than 1 GB. It makes also the update quite easy and simple to be make Over The Air or OTA which is now the preferred updating process among many iPhone or iPad users.