This Apple product specialist YouTuber has compared iOS 9 with iOS 8 reactivity on the iPhone 4S, iPhone 5 and iPhone 5S. Watch that… 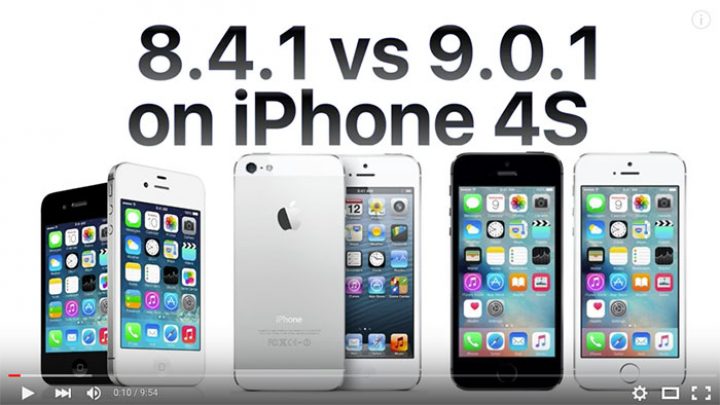 As any other new version of Apple mobile operating system, iOS 9 brings a tone of new features. These evolutions come with extra demand for your iDevice hardware. We may fear that the oldest iPhones or iPads reactivity would suffer from such an advanced operating system. And actually, we have to admit that it hurts the reaction time of your iPhone when you install iOS 9. But in what respect?

Thanks to the YouTube channel iAppleBytes you’ll get the answer in video. This Apple products specialist YouTuber has compared iOS 9 with iOS 8 reactivity on the flowing iPhones :

Quite logically, the startup time is substantially longer on the iPhone 4S and iPhone 5 which have been updated from iOS 8 to iOS 9. Aside from that, the iPhone 4S has a minor additional lag when opening the camera application, when launching the web browser, etc. but nothing really dramatic. The iPhone 5S, as one could expect, is still absolutely OK to be operated under iOS 9. No real additional delay will be noticed by the users according to this videos.

Oddly enough, while all applications may be slightly less reactive with iOS 9 on the older iPhones, Siri is much faster under iOS 9 than under iOS 8. Cupertino did well boosting Siri’s servers and algorithms.

Looking at these videos, you can make your own idea on whether you can update your iPhone 4S or iPhone 5 to iOS 9 without fearing to get a slow iPhone, but as far as what I have seen, I would consider updating an iPhone 4S if I were you. iOS 9 has a lot to offer and the minor reactivity loss will be greatly balanced by the extra features brought by iOS 9.